Tabriz is a spectacular and beautiful city of Azerbaijan, Iran. This city has always been one of the top five destinations on the tourist list, and perhaps this is a good reason to pay attention to its tourist attractions and history. Among all the sights of this city, there is a very beautiful and spectacular mosque that is different from other places in every way. The Blue Mosque of Tabriz has a lot of bruises from the problems of the time, but despite all these ups and downs, it still stands tall and proud.

Join Alibaba Tourism Magazine for a tour of the Blue Mosque and its historical beauties.

Kaboud Mosque is built on Ama Khomeini Street in Tabriz.

Kaboud Mosque in Tabriz is about 600 years old. At the entrance of this mosque, the completion date of the building is 845 solar years, but historians know the start time of the project at least 30 years ago.

Why and how to make a Tabriz match ball?

Although Aq Quyunlu left only one work for Tabriz, but everyone knows that they did it in the best way. It was around the year 450 that the lady of the Jahanshah court encouraged her to build a large and beautiful mosque in Tabriz. A beautiful building like no other in Iran. Have you heard the parable of doing good is of filling? Jan Begum Khatoon with encouragement and Jahanshah with building the mosque in the best way so far for about 600 years have kept their name alive.

Anyone who enters the building of this building and sees its beauties, can not deny the beauty, good architecture and artistry in this mosque. Although this mosque was severely damaged by a terrible earthquake many years ago and its beauties were handed over to history, but still the tiling, mirror work and beautiful blue-blue color of the mosque show the most eye-catching picture frame to the spectators. 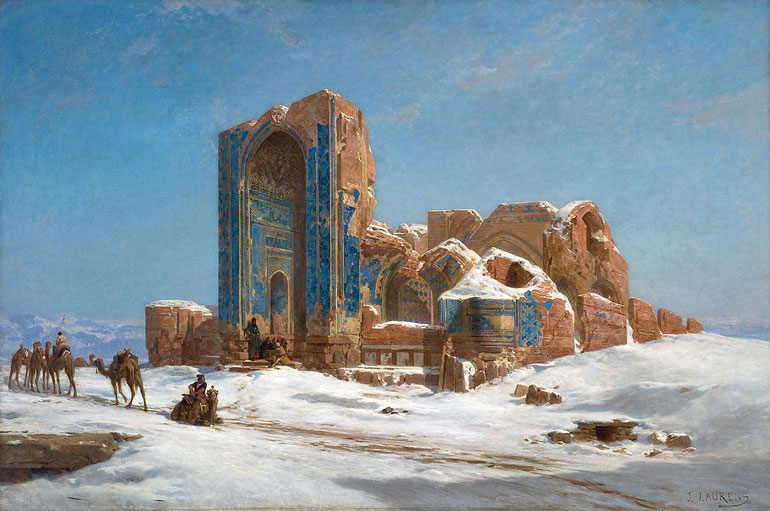 It was the year 1193 AH when the earthquake left almost nothing of the mosque. Large domes, large parts of its patterned walls, parts of the building tiles, and collapsed. This caused great Iranian artists and restorers such as Professor Reza Memaran to gather together in Tabriz from 1318 to 1955 to appease the Blue Mosque. This famous and valuable Iranian architect was 39 years old when he stopped the restoration of this building and when he left, 30 years had been added to his life.

Since 1310, when this mosque was registered in the list of national monuments of Iran, it has almost no other use. Every day and every night many people enter this mosque. They sit and watch the blue tiles, talk and leave after all this, unaware that history has inflicted many wounds on this building and has never been asked a question.

For example, never ask a wrestler: Where are the other parts of your building? Why were they destroyed and you survived? In the past, this mosque was not just a place to pray. The library, monastery, bazaar and از were other parts of this large and magnificent complex that all together formed the Mozaffariyeh complex of Tabriz, but now اکنون

Let’s preserve the only remnants of the Agh Quyunlus in Tabriz. 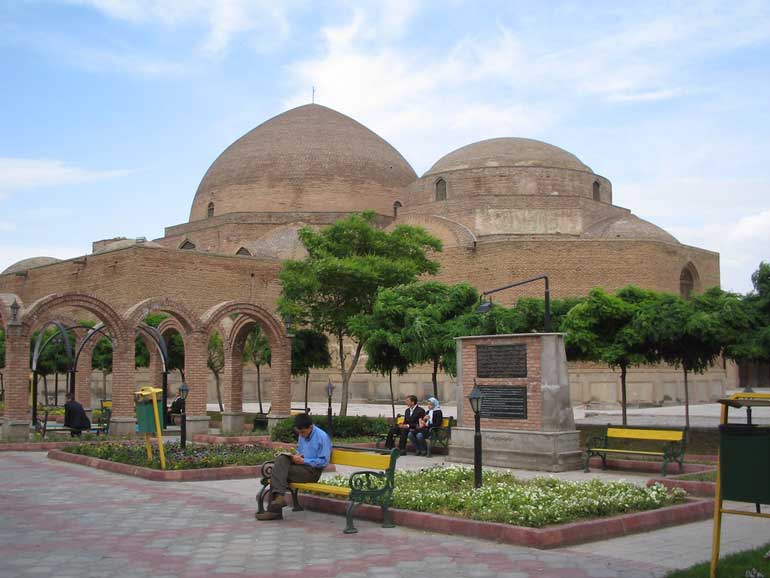 Is the architecture of the ball eye-catching or simple?

The Blue Mosque of Tabriz has three distinctive features with other buildings built in its period. The first case, which was not ineffective in naming the mosque, is the tiling and color combination of tiles and bricks in this building.

The corners of this mosque are made of bricks. Bricks, each of which has been stacked with the effort and art of Iranian architects. Tiles and colored tiles are tiles that, after the artistic placement of bricks next to each other, make the lower columns, the inscriptions around the dome and the walls of the mosque spectacular. There are only four blue mosques in the world, one of which is the Blue Mosque with blue and turquoise tiles.

Another feature is the special architectural wristband and its construction in accordance with the climate and weather conditions. The fact that an architect, 600 years ago, thought about the climate of the building and knew the solution to the climate problems of Tabriz and used them while building the mosque, is itself a great masterpiece that should be encouraged. It is a pity that Izz al-Din Qapuchi is dead. 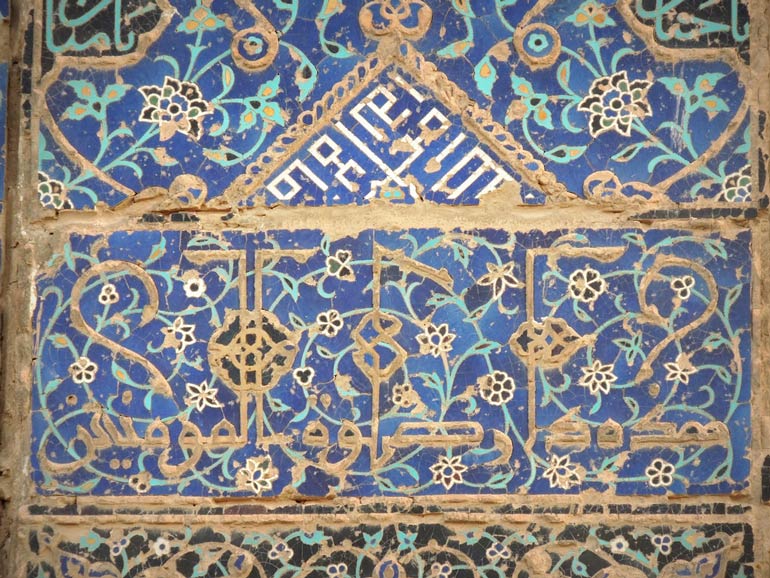 As mentioned, the mosque is built in such a way that people inside it are protected from the cold weather of Tabriz. Considering a special design for the windows, so that they direct light and heat inside the mosque, and closets for placing shoes in it, are among the delicacies predicted in the building and the plan of the mosque.

The third feature is the plan to build a mosque. The Blue Mosque does not have a side porch and after passing through the entrance of the mosque and the porches, you enter the main courtyard of the mosque. This porch is protected by four large and sturdy columns, which actually support the large dome of the mosque. Parallel columns and square scenes are one of the recurring features in the architecture of this complex that has been repeated in most places. The fact that architecture can hold such a large dome on four pillars completes the masterpiece of Izz al-Din al-Qapuchi. 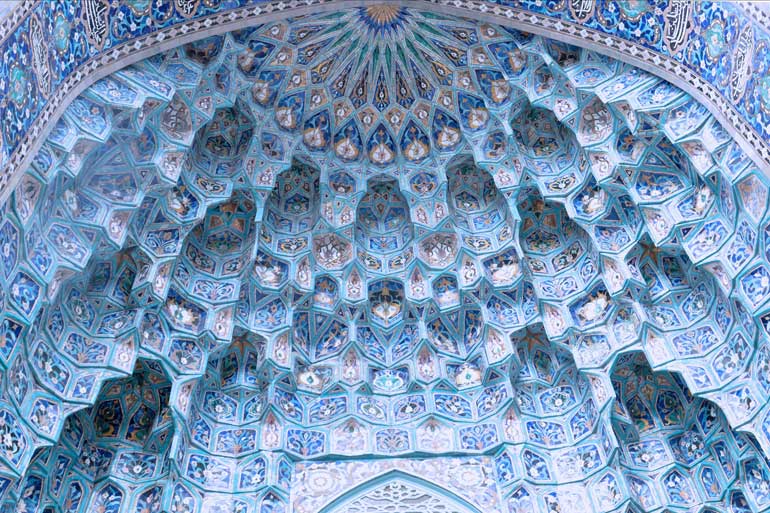 Maybe if someone enters this mosque with the current conditions, seeing the condition of the building will blind his taste a little, because Many parts of the entrance of Kaboud Mosque in Tabriz have been damaged. Some of these damages go back to the earthquake and finally to the special climatic conditions of Tabriz, but the bigger part that goes back to the culture of the people, can not be ignored at all.

It is not the fault of time and space that the gold of the inscription inside the mosque is stolen after separation. The fact that Iran, without stability, does not pay attention to its symbols, is due to the kindness of the Organization for the Restoration of Monuments and Monuments. 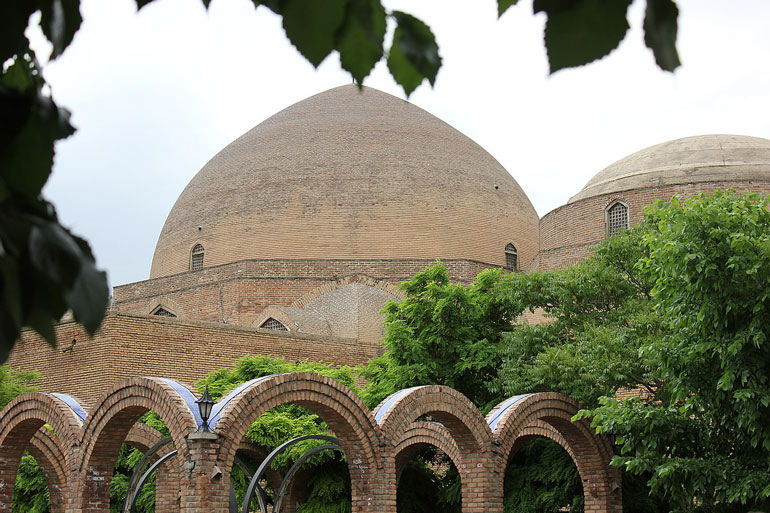 Section of Kaboud Mosque in Tabriz

What is marked in history and the books and the entrance of the mosque show that this building is a cultural and welfare complex of which the Blue Mosque is the only magnificent remnant. One of the features of Azeri architecture is the existence of monasteries and libraries in such collections. What historians are somewhat sure of is the existence of two or even three other large buildings around the mosque, of which there are now no traces.

However, the building that is now in existence and this article has been written in its honor, still has many spectacular and beautiful parts. Apart from the porch and the entrance of the mosque, which are among the most artistic structures in the history of Iran, this mosque also has two other sections. 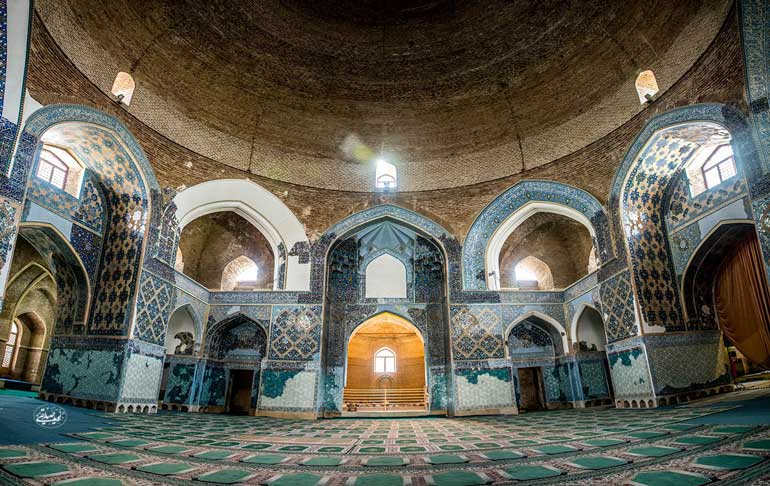 There are two tombs in this crypt, which I will explain later. 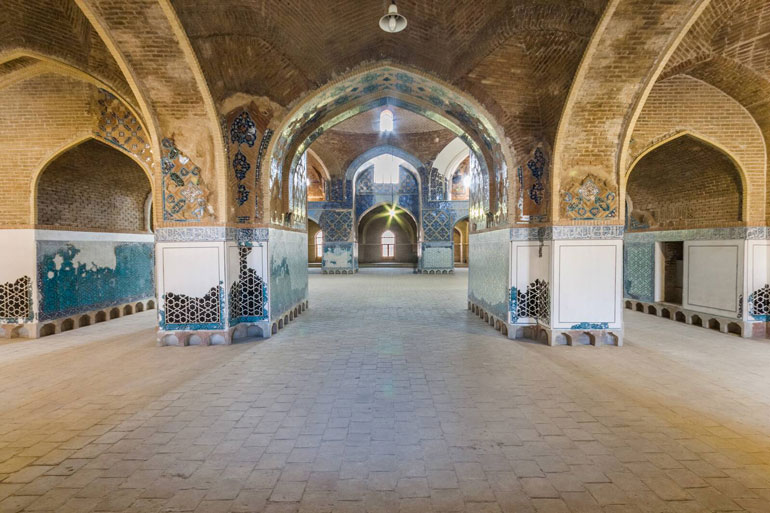 The porch, courtyard and porch of the Blue Mosque

From the entrance of the mosque, you will see a building between tens of small domes. A square building surrounded by a portico with arched shadows and fountains. The middle building is the main courtyard of the mosque and the place that is still available to visitors.

Whether we like it or not, there is no longer any mention of the 9 small domes that deepened the artistic dimension of the mosque, but the porches are still beautiful and you can see them.

One of the parts that we did not talk about much in this article is the altar of the main nave of the mosque, most of which was destroyed after the earthquake. The fact that after all these severe injuries, you can still see traces of glory and beauty in the sanctuary of this mosque, makes me feel more proud, because I realize what intelligent and artistic people once ruled Iran. 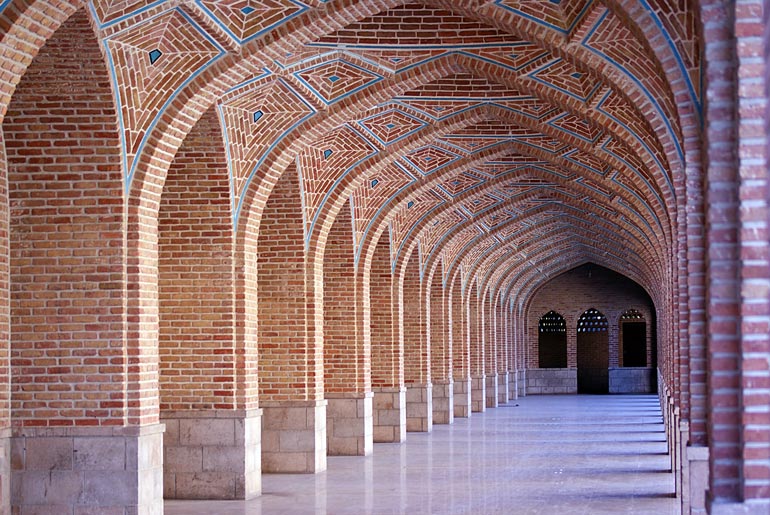 The tombs of the Blue Mosque, belonging to the founder or someone else?

All these discussions have been recorded from the top to the bottom of this mosque because of two people, namely Jahanshah and his daughter Khatun. Of course, one cannot ignore the work of the mosque’s architects, but what made this building happen was the diligence of this woman and the perseverance of her father.

Years later, it became clear that the crypt of this mosque has two tombs, and according to the documents that testified to the burial of Jahanshah and his daughter in the mosque, they belong to these two people. I wish both graves were healthy and full, but now there are only two empty graves in the crypt for unknown reasons. 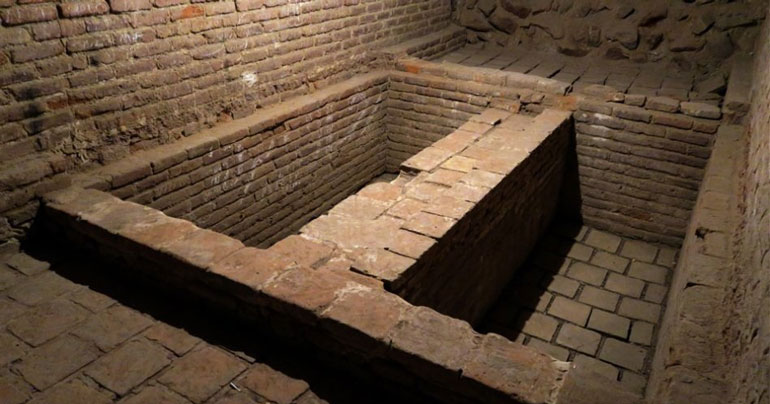 Address of Kaboud Mosque and ways to access it

Khaghani and Haj Ahmad bus stations support all traffic on this street. It is better to ask these two stations from the driver of Tabriz buses. You can get off the BRT buses at the Blue Mosque station opposite the entrance to the mosque. If you take the subway, it is better to get off at the clock station station. In this case, you can reach your destination in a few minutes on foot. 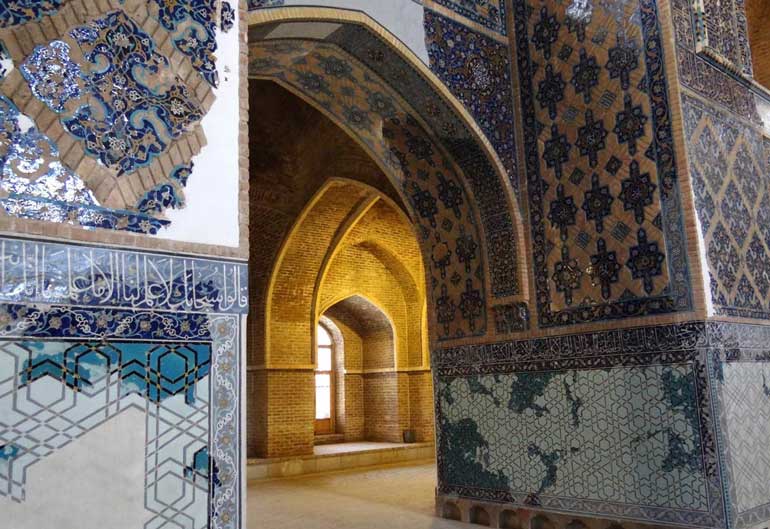 Beware of the bruises of the Blue Mosque of Tabriz

Historical accounts are always separated from religious buildings. It does not matter if it is a historic church, a historic mosque, a school or an old café. Works and symbols made from the culture of that time should be preserved as a symbol of the generations planted by them so that at least if we do not have something of our own, we will not destroy the work of others.

If they said another hundred years who pierced the wall of this building for the gas pipe, what do you think they would answer? What will the future judge us? Take care of the world around you so that history has a better judgment than you. I suggest you share your opinion with us or if you know of something like this, name it for more information.

Closure of Qeshm passenger wharf due to unfavorable weather conditions

Thousands of years of life of Aghasht village of Karaj

What are the obstacles to the development of the tourism industry in Mazandaran province?